Full-time Working Parents and Their Children

Here in Ireland the summer holidays are in full swing, with at least 4 weeks still lying ahead for the majority of school-age children. And while some parents have the privilege of being able to stay at home with their children, and so fully experience their holidays with them, many have had to juggle the demands of working full-time with the needs of their children. In today’s blog post we consider this issue through the lens of Owen’s book for fathers “Standing on the Shoulders of Giants”. In the final section of the book (Section Four: Parenting Today) Owen addresses many issues facing parents today that previous generations did not have to deal with. We have included the first two questions from this section as they are related to each other. If this is your first time visiting our blog, you may want to start with the introduction post here or click on the Category on the right to see all the relevant posts so far.

HAVE YOU FOUND THAT BOTH PARENTS WORKING FULLTIME HAS A NEGATIVE EFFECT ON THEIR CHILDREN’S EMOTIONAL DEVELOPMENT? 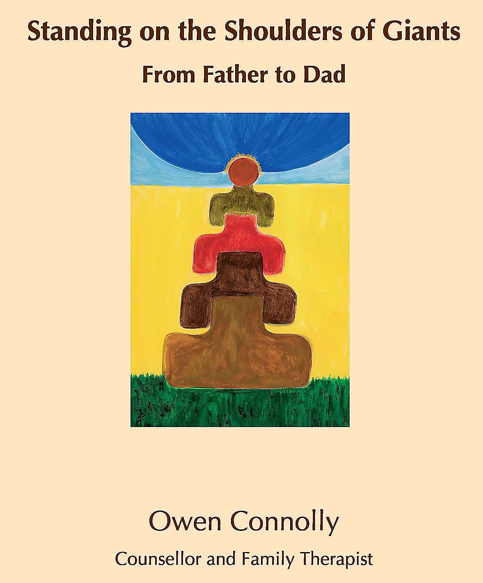 There’s nothing wrong with both parents working, but if you’re looking at best practice, then I would suggest that for the first three years of a child’s life, that a parent, preferably the nurturer –the mother – stays home. It’s important that they have some level of continuity or sense of connection, especially with the mother, during that time. And the reason I’m saying that is that I don’t believe we are developed enough during those nine months in the womb. The three years after the birth is really an extension of the mother-child connection that we see in the womb, and this “outer womb” period is also an extension of the period of development that began in the womb. The successful survival of the child is greatly helped by maintaining a close relationship with the mother during those first three years. It’s as if a woman actually carries her child for three years and nine months – that’s how long it takes before the child starts to recognise itself as separate from the mother and is able to really branch out on its own.

Children at four, having just come out of that womb phase, are really too young to go to school. Yes, they can be somewhere where there is play going on and even play which contains an educational subtext, but to start formal schooling at four is, in my view, a mistake. By six or seven, they are much better able to cope with the more scholastic side of school.

Going into the future, we don’t know what damage will arise from children being dropped off at a crèche at seven in the morning and being collected at seven in the evening. Perhaps it will only result in the child coming up with a different coping mechanism to deal with that situation and perpetuate its survival. In Ireland, it’s a relatively new phenomenon and we’re just making it up as we go along. We’ve been here on earth a long, long time, and over thousands of years we’ve had to adapt and change to suit each change in our environment. The children born into the world today will adjust accordingly to enable the human race to survive, because survival is the brain’s priority.

WHAT ADVICE CAN YOU GIVE TO PARENTS WHO ARE AWAY FROM THEIR CHILDREN A LOT AND MAY FEEL GUILTY ABOUT IT?

We have to be encouraged in knowing that the vast majority of people are doing the right thing with regards to the raising of their children. But there are a minority of people who are struggling, because due to work, separation or divorce, they feel guilty about leaving their children and are compensating in unhealthy ways. The guilt that women feel in these cases is actually the innate feeling that a woman will always feel when she has to leave her children – it’s a part of her design, a design factor common in all women. Men and women in these situations fear that they are not giving their children what they need so they try to over-compensate by making their children “happy” all the time and by doing everything for them when they are together. To these parents, happiness is when they see the children smiling or laughing, and they get very hurt and very saddened themselves when they see their children crying or getting upset.

We are all moved when we see our children upset, but we have to understand that the way to deal with such a situation isn’t giving them more gifts so that they are happy and smiling temporarily. We have to comfort them. It’s a big problem when the adult lacks the ability to comfort the child and to know that what that child needs at that sad moment is really a hug or an arm around them and an assurance that everything is going to be OK. If children are only given “treats” in those situations, they get into the place of “wanting” and lose touch with their real needs. They’ll want another toy or they’ll want another hour up at night or they’ll want to watch the television for longer; they’ll want a Playstation or an X-Box or whatever else is going, and you’ll be under pressure to provide that. Then you have a short-term smiley, happy kind of appearance in the children, but in the long-term what you’re doing is winning some little, minor battles but losing the war. You might say that we shouldn’t see our relationship with our children as warlike but in actual fact it is that kind of relationship – it will always be a “them and us” situation. They are determined to get their way, and in many ways, because of our guilt or the circumstances of our past, we want to let them. But in that case, what we are actually saying to our child is “You really are the Boss in the house; you’re the one that’s in control.” What many adults don’t understand is that when you give that type of management over to the child, you’re looking for them to manage you and the world around them with very little information to go on. Their own library of information is limited to a whole series of wants, and they won’t necessarily know what they need. It leads to them being very confused, and these confused children are then likely to act out in bad behaviour, because their bad behaviour is the result of expecting things to be done the way they want. Selfishness, aggressiveness, not wanting to do work at school, only doing work for teachers they like, etc. are all the consequence of this type of situation. And so what we have is a generation of people growing up with that selfish outlook, who will not survive in the world.

Now sadly, in all circumstances where you have that kind of rot, when you put it into the barrel of the world, it spreads. And you’re getting more and more people who have that type of attitude – that the child should take authority. I have an issue with the Charter of Rights of Children because it focuses solely on rights. I fully agree that children need to have their rights acknowledged as a protection, but rights without responsibilities is a kind of a nonsense. And, when it comes to very specific rights, you can’t really put together a comprehensive package that covers all children, because they all have different personalities and live in different circumstances. Experts tell us correctly that every one of your children will be uniquely different and that you are the most important person in their lives. If you, as the one that is best able to deal with their issues, hand it over to the United Nations or any other body to set down a particular Bill of Rights, I think you’re making a dreadful mistake. And when the ISPCC and others attempt to enforce some of these rights without responsibilities, they are actually promoting a situation in which the child actually does call the shots. Give the ammunition to a child without them having the full library of information, and they are likely to kill you; they are likely to give you the chop, because that’s the way they are. These are strong statements to make but children are parasitic. They live off of you in order that they might survive, and if that happens without some kind of management, you, as a parent, are letting them become parasites on the rest of the world. They will grow to think that the world owes them something then rather than that they have something to contribute to make the world a better place.