In the last two blog posts we have been looking at the behaviour of children and how parents can best discipline their children. Owen Connolly‘s advice, from his book for fathers entitled “Standing on the Shoulders of Giants”, is based on his long career as a counselling psychologist and as a father and grandfather. We round up this mini-series with today’s blog post on “bold” children – a uniquely Irish term, essentially meaning “cheeky”.

“Boldness” is just another method a child has discovered that will help them to get their own way. But what does “boldness” originally mean? I love the word “bold,” because the word “bold” means that you are courageous and so when we talk about a bold child, we should be talking about a courageous child. This child is courageous in the sense that he or she has identified a little button in you that can be pressed that will get them their own way in the same way that a pigeon discovers that by tapping on a little sign that it will get them a peanut. It doesn’t take an awful lot of time for these patterns to build up. Humans are not a million miles away from Pavlov’s dogs, who started salivating when the feeding-time bell was going to ring. We’ve got to realise that a very large part of us is driven by instinct and conditioning, but that there is a small part of us that can exercise management over those instincts and habits. As humans, we are very susceptible to conditioning. There are people who have been institutionalised who might not be able to open a door, even though they were very functional before they went into the institution.

Children analyse the conditions around them and begin to recognise what they can or can’t do in order to get their wants met. Think of a screaming baby in the middle of the night. When we parents hear that screaming, we get up and check if they’re dry or need food or need burping. So from very early on, the child learns that there are certain activities – certain ways of yelling or screaming or stamping their feet – that get your attention. (In fact, the children of deaf parents don’t throw tantrums!) These methods of getting your attention were all survival methods at one stage. Young children would do certain things to get the attention of the adult in order to help them not be at risk or in danger, but we’re not in that kind of primitive world anymore. And because we’re not in that kind of world, we need to recognise that children are sometimes using those danger signals when all they really want is a hug and to be told that everything is going to be O.K. If you’re not picking up on the signals that children are sending to get their emotional NEEDS met, they’ll produce an angry response in order to have their WANTS met, wants like sweets or toys or simply to get their own way. And giving in to that child’s wants may not be the right thing. 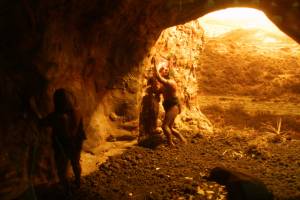 We need to comfort our children and to keep reminding them that we are no longer living in prehistoric times. We are living in surroundings that are more comfortable and we don’t have to act like cavemen (or cavechildren) any more! There are many instincts in us that drive us to act as if we are still in a cave so we’ve got to be careful of that and understand that a lot of our behaviour is survival behaviour. Survival behaviour causes children to scream and roar to get noticed. If the children are in any way traumatised, then their speaking out to get noticed comes from a part of them that’s defensive and protecting them. But sometimes they’re speaking out just to get something a marketing guru has convinced them that they need.