Carrying on with our Thursday blog series based on Owen Connolly’s book for fathers, “Standing on the Shoulders of Giants”, in today’s post we look at how to parent without reacting to, or re-enacting, our own upbringing. Owen looks at how parenting styles have changed over time in Ireland, and how best to teach children responsibility while also allowing them the freedom to choose.

HAVE YOU SUGGESTIONS AS TO HOW I CAN TEACH MY CHILDREN TO BE RESPONSIBLE WHILE AT THE SAME TIME GIVING THEM MORE FREEDOM THAN I HAD GROWING UP?

In the 1950’s and 60’s and before that, many children were brought up with huge responsibilities but no freedom. Unfortunately, we are now suffering the backlash of that. We are seeing an enormous number of children who are brought up with all the freedom and very little responsibility. And this new phenomenon is responsible for many of the ills we see today. Children are much more secure when given responsibility and defined limits. We need to understand that children as young as six and seven in other societies take on great responsibilities. We don’t want child labour or to have our children take on too much, but many of us feel we should keep our children from roles of responsibility until they are 15 or 16 or 17 and by then it’s too late. They won’t entertain the thought of taking on responsibility then!

The responsibilities you place on each child should depend on what you perceive to be an appropriate role for your child in the house, taking their age and personality and circumstances into account. For example, if a child is two and is just starting to walk and has been playing with the pots under the sink, you should help them to understand that putting the pots back is a responsibility. Introduce the responsibility of putting them back as a game, and show them how pleased you are with their help. If you are showing a small child how to pick things up and put them in the bin, don’t worry if they put good things in the bin. As with the example of the pots, treat the responsibility of putting things in the bin as a game. It teaches them a responsibility and shows them how a house functions properly. It also teaches them that the house should be a safe environment for you and for them. Keep on reminding yourself that you didn’t learn a sense of household responsibility by accident – it was taught to you somewhere in your own development stage. (If it wasn’t, then you really need to learn it now!) So as early as possible, as soon as the children start to move around the floor – on their bottoms or hands and knees or whatever – engage them in the “play” of doing chores. Bring them to the kitchen sink when you’re washing up and let them dry dishes. 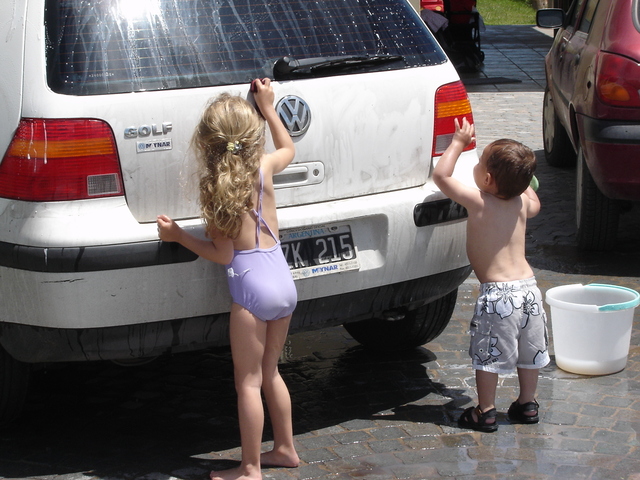 If your child is helping you wash the dishes or clear the floor or preparing food, you need to give them time and understand that they’re only at the learning stage. A lot of them feel very awkward and nervous about things that they are asked to do, and they can easily develop a can’t-do attitude. If your child is developing a can’t-do attitude, it’s because you’ve hurried them into a task. Nobody learns hurriedly. If they are forced to work quickly, they become very confused about the task, and if they are criticised over how they’ve done a new task, they will become very discouraged. You must have patience with the child. When teaching them a task, it will take much longer than if you had done it yourself, and that’s because the child is taking that long to learn and it needs to be allowed to take longer. Many parents will say to their child who is assisting them with the washing-up “I’d have it done 10 times faster myself! Will you just step down!” or, if they’ve asked them to do a task, they’ll often come back in and say, “Have you not done it yet?!?” and “Why hasn’t it been finished?!?” These parents will go on and on and on and nag and nag and nag about the way in which the job was done. Meanwhile, if they were working for an employer that didn’t train them properly or give them the time to learn, they’d be very upset. They’d report it to the union and wouldn’t really fancy going into that job. Your children are intelligent and they’re bright and they’re learning all the time, and the person that is the best teacher in the house is you.

If you want your children to learn well then you’ve got to give them the time, and giving them time means you’ve got to understand their strengths and weaknesses and take them into account as you train them. They’ll follow your lead and instructions, but if you are assuming that they’ll have this miraculous ability to be wonderful at washing dishes and tremendous at hoovering the floor and to be as good as you at any of the tasks around the house then you are missing the whole point. You’ll get them so upset that they’ll want to give up and not do the job. You are going to make them fear criticism as they start new tasks. They won’t feel a sense of encouragement from you, and, as I’ve said, encouragement is one of the basic intimacy needs of all children. The fear of criticism and sense of discouragement will lead a sensitive child to do twice as much work in any of their efforts at school, because they’re frightened of not getting their exercise correct or they’re frightened of criticism from the teacher and from others. This is made worse if they are made to feel ashamed at home or singled out at school for not having something done correctly. So, as you can see, parents are essential teachers in a child’s life. They are teaching their child the best way to live in the world for themselves. They are teaching them how to be more secure and to develop a can-do attitude. Your child should be going into the world with the attitude that “I can do it but I need to have the training for the doing of it. I know that if I get the training, I’ll learn the task, no matter what it is.” And when they’ve done a task well, reward them with favourable comments like “Daddy feels really good when you help out.” You must introduce them to “feeling words” and “feeling statements” because they are in the emotional reasoning phase. Remember always that children (like all of us!) have an inclination towards negative thought, so you never have to tell them how to feel bad, but you do have to help them feel good about something they’ve done. They need to be encouraged. When they are rewarded or entertained for the day, ask them how they feel about it so they can internalise the good feeling associated with that event. This will help them build a library of good feeling that will sustain them in the future.