For today’s rather chilly #ThursdayThoughts blog post, we have a longer post to read while you are hopefully tucked away warmly at home. We consider the reluctance of Irish parents to compliment their children. Owen Connolly shares his thoughts on where this kind of thinking may have originated in Irish culture in the hopes of helping us to break the bonds of the past and rise above our history, in our families, our culture and our nation. Perhaps we may even learn to accept a compliment ourselves?!

ARE THERE ANY HISTORICAL REASONS WHY, AS IRISH PARENTS, WE ARE OFTEN RELUCTANT TO COMPLIMENT OUR CHILDREN? 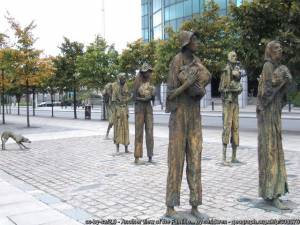 There are several reasons why historically Irish parents have been reluctant to compliment their children. The history of Ireland is a history of occupation. The Irish were occupied for 700-800 years by people who characterised the native Celts as “dumb and lazy” and as “drunkards and fighters”, and they were made to bow their heads or tip their caps to anyone who had any sort of position of authority or any education. If you showed yourself as promising, you were often put down by those in authority because you were getting “above your station.” The authorities were convinced that if you gave the Irish any kind of authority, then their position as governor or occupier would be undermined. If you were working as a servant in one of the Big Houses and you could read or write, that was a disadvantage, because you were getting “above your station.” So the “above your station” mentality became a very important factor in the psyche of Irish people. With it came hundreds of years of people not being able to raise their head high, of not being able to concentrate on their own well-being, and it led to parents even encouraging their children not to raise their heads, lest they be hurt or put down. This led to a kind of community despair. Many had to emigrate where some did very well for themselves because they no longer had the suppression of 800 years hanging over them, a suppression that still attaches itself to people today. Many Irish people who travelled did extremely well, while others seemed to have carried that suppression inside them wherever they went. This was especially true of many who went to the UK for labouring jobs. Due to that suppression, as well as loneliness and sadness, many of them did not succeed. But many did do well, so when I talk about Irish men as being “on the shoulders of giants,” I’m talking about men who’ve survived and thrived despite hundreds of years of being subject to the most horrific conditions, not having a real sense of being valued for themselves by either the larger community or even within their own households.

The parents of yesterday felt that children should be seen and not heard, so, as a child, you didn’t get to voice what you had to say. And the parents of yesterday had this concern over “swelled heads” – in my 61 [now 71] years of life, I’ve yet to see someone who got a swelled head because somebody said something nice about them. So this whole idea that bragging or boasting about your children in their presence was a bad thing came down through generations of people who were afraid to lift their head above the parapet, who were afraid to see themselves as valuable for themselves. And so long as Irish people had that kind of mentality, the colonisers were able to keep control over them. Nevertheless, I am convinced that as a nation, we are starting to come out of that mentality. We are beginning to see ourselves as we really are and value ourselves and applaud ourselves. We are starting to understand that we have something valuable to offer the world. We’re moving away from begrudgery; we’re moving away from “Ah sure, I knew him when he had no arse in his pants” or “Ah sure, his father was only a labourer.” We’re moving away from all the putting people down and the petty jealousies. We’re only a generation away from it, but I believe we’re moving further and further away from it all the time.

There’s a huge generosity in the Irish people, and that’s been seen, for instance, in the way that the Irish are always huge givers whenever there’s an appeal for people affected by natural disasters. We are a people who’ve been led a great deal by emotion, and that’s a very valuable quality, but if not used wisely, it may become childlike. My view is that the Irish people were never really allowed to grow up so you had generations and generations of children raising children. They had this physical ability to do work and an intellectual ability to write well but emotionally, they were still childlike. They had become stunted in their emotional growth by 800 years of suppression, not having the freedom to express how they really felt. This led them to express themselves through music which was often sad and melancholic, speckled with the occasional cheerful piece.

The modelling for parenting and leadership shown to the Irish people by their occupiers was one of control, control, control. It wasn’t a healthy model of relationship that involved neediness being met, and this led Irish parents to be controllers in their homes and Irish bosses to be controllers rather than leaders in the workplace. In addition to this, it led to the lax attitude of the Irish towards the law and law-breaking. For 800 years, people broke the law because it enabled them to laugh behind their hands at the powers-that-be, saying, “You think you’re ruling us, but we’re shooting your rabbit or killing your deer.” There was a celebration of the “cute hoor” – the guy that got away with things – because that type of person becomes a hero under a regime based on suppression. We’ve grown up with a history of control and law-breaking that still affects Irish relationships today, and this aspect of the Irish character really needs to change.