What Can We Do About Childhood Obesity?

This Thursday we consider a topic that is very much in the news and increasingly on the minds of parents, society and government too. It seems that childhood obesity is only increasing, despite the measures many are taking to address it. In his book for fathers, “Standing on the Shoulders of Giants”, Owen Connolly has looked at this question and given his opinion on it. He has also expanded on his answer by addressing the question of meal times for families, as the two issues are linked together. How do you think that we as individuals, family and society can help keep our future adults in shape?

WHAT CAN BE DONE ABOUT THE INCREASINGLY RAMPANT PROBLEM OF CHILDHOOD OBESITY?

As you have certainly read, there is a connection between childhood obesity and numerous health problems, including juvenile diabetes. In some cases, children are becoming overweight because their food intake is too large when they are very young – in other words, they are being over-indulged. If children are forced to eat large amounts of food when they’re younger, their bodies become accustomed to large portions that are not used up as fuel. When combined with little or no exercise, all the body does is to store up fat with the objective of having stores in case of famine, a leftover survival mechanism from earlier times. What needs to happen is that parents should be giving sensible amounts of food to their children. You know the food appropriate to the age and size of the individual child, and, if you don’t, you should take the time to learn. You should also acquaint yourself with the nutritional value of various foods. Children need a balanced diet that meets their nutritional needs, as opposed to what’s most convenient on a busy weeknight.

WHAT RECOMMENDATIONS DO YOU HAVE FOR FAMILIES WITH REGARD TO THEIR MEAL TIMES? 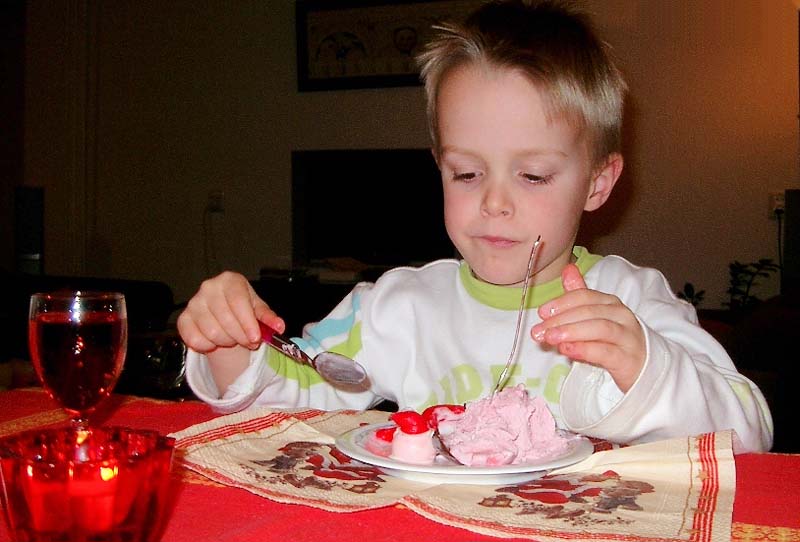 Remember that just as you may be focusing too much on convenience because you’re knackered after work, your child will also prefer the faster, more convenient foods because they want to get back to playing, etc. That is not the best thing for them or for you, however. My suggestion is that at least once a day, if at all possible, you and your children should sit around the table and have a meal together as a family. I think that one of the biggest disasters in family life today is that families don’t sit down to eat together. Children often don’t see you eating and therefore don’t see normal table manners or behaviours that are appropriate around a table. They also don’t get the chance to engage with members of their own family in conversation around the table. Family meals are a very good place where people can share what’s happening with their lives, how school has been, what difficulties have arisen, etc. Sitting around the table is almost like praying together – “When you eat together, you meet together” – and if you meet together, there’s a fair chance that you’ll start talking about where you’re at. Once again, it’s up to the parent and not the child to insist on such an arrangement. If the parent makes the time for such a commitment, the benefits are huge for the children in the long run. If you don’t do it, the child will want to take the fastest food they can get, so they can get back to the television or get back to the X-Box or whatever else they’re playing with at the time. They’re going to go for chicken nuggets and chips or a burger or some takeout, because they can just sit down and eat it as they do some non-bonding activity.

These days, children get very used to the idea of speed-eating while watching television or engaging in some other activity, but, while the digestive system is very well designed, it is also very delicate, so it’s not a good idea for the children to be occupied with some kind of television programme or video game when they’re eating food. It’s not healthy, because it doesn’t allow your digestive system to deal with food properly and distribute the energy that is required for your body from that food. When they’re shovelling stuff into their stomachs, their stomach won’t necessarily understand that it’s engaging with a food activity. It thinks the child is engaged with watching television or playing a video game. Parents should try to understand this and try as much as possible to not have that kind of thing happen.

While it is very important for families to eat together and engage in discussion with one another while they do so, it is very important that you teach your children not to speak with their mouths full. If you speak while you’re eating, the little trap door that separates the lungs from the stomach is waving back and forth and it makes the possibility of choking much more likely. People who have choked on their food in restaurants usually did so because they had a mouthful of food but kept jabbering away and the food went down the wrong way. So, again, just remind your children of the very sensible old saying: “Don’t speak with your mouth full.” Is this being taught to children today? I think not. These days we often have conversations with people who are chatting away with their mouth full. You say something and they’re speaking back to you with a whole lot of blah, blah, blah… Although it’s great to hear what somebody has to say, they’re putting themselves at risk.

There are psychologists working with food companies, toy manufacturers and marketing people, and they are very well aware of how children respond to things, so they help these companies deliberately target their products at children. I often have issues with members of my own profession who use their knowledge of the demands and feelings that children have for this purpose. In the case of the food industry, it works like this: Because parents feed their children a lot of sweet items or salty items very early on in life, experts have realised that children have an automatic attraction to very sweet foods and to high levels of salt. The food companies hear this and say, “Children’s taste buds are excited by the kind of foods that were given to them as infants that contained high levels of sugar and salt. What we must do is to stimulate that memory.” They add sugar and/or salt to their foods, regardless of the fact that it makes the food unhealthy. As for the toy companies, many have caught on to what their marketing people have said, which is that the way to win it is to sell to children because the guilty mums and dads will buy them whatever they want.