The Effect of Alcohol Abuse on a Family

Today’s #ThursdayThoughts blog post considers a serious issue that affects many families, sometimes unbeknown to outsiders. The use and misuse of alcohol has been covered in great deal over the years by media in Ireland and much progress has been made in addressing the abuse of alcohol. But the problem still persists and has a profound effect on families, and thus society. In his book for fathers, Owen Connolly has addressed this issue and you can read his thoughts about it below.

HOW HAVE YOU FOUND THAT ABUSE OF ALCOHOL AFFECTS A FAMILY? 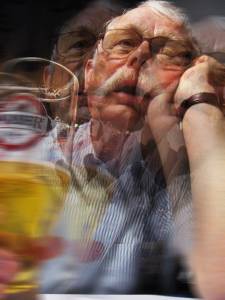 It takes four or five generations to get alcohol addiction out of a family. And our Irish ancestors, being a downtrodden people with not much going for them, found alcohol to be a very attractive escape. Years ago, they didn’t have Prozac and other medications to deal with the depression, so our ancestors relied on “the old reliable” –alcohol. They knew that if they took a few glasses of beer or whiskey, they’d enter an altered state that would take away the pain of their miserable existence – an existence in which even the next day’s meals were in doubt. They created a society that celebrated the drink, and celebrated the Paddy who, despite being very depressed in every day life, could become the life and soul of the party after a few drinks. This applauding of alcohol occurred because alcohol lifted the spirits of those who were suffering, but we are not a downtrodden society anymore, so we must stop our ongoing desire to self-medicate.

We criticise our ancestor’s drunkenness but the survival of many of the men depended in their being able to get out of their heads. The alcohol helped them to bear another week or another year of misery and hardship. It helped them to deal with the deaths of some of their children or to deal with the fact that their eldest child took the boat and that they’d never see him or her again. There was a melancholy that needed a cure, and alcohol provided it.

The way teenagers get drunk today is no different from what would have been done in the past. Years ago, the men would have gathered together at a fair after selling a bullock or cow and get themselves absolutely blotto – hence, the caricatures in Punch Magazine and other publications depicting the drunken Irish. All you’d see on a Saturday evening were these fellas falling around the place, legless. They’d go home to a wife who had to make herself available to them, and then they’d soon find that there was another child on the way. In the end, good things came of a not-so-great situation. The very large families helped economically, because it often required many to work together to make a success of the household. Also, because of disease and sickness, many of the children would die, so there was a survival/self-preservation aspect to it as well.

It is my opinion that young people today drink too much because they don’t know where they’re going. Their life feels almost pointless. The young women don’t know if they’re ever going to meet somebody who’s willing to commit themselves to a relationship, and yet they’re frightened by what they’ve seen in the relationship between their parents. Divorce is a reality here now, so there’s no security in relationships anymore. Men and even women are not prepared to commit to one another and yet there’s an instinct in us that wants to commit so that we can engage in procreation and bring new life into the world. So there’s a struggle within and between men and women. And how do they deal with the despair connected to that struggle? Many young men and women go to the pub and drink to excess, because for a very short time, they might have absolutely no memory and block out the unpleasant things in life.

Men may also be getting drunk because a man naturally sees himself as a doer and a fixer, so he feels he must do, fix, and sort things out. That’s what makes him feel such a keen sense of responsibility for the welfare of his family. When a man abdicates his responsibility (either due to losing his job or some other factor), then he can become very lost. And how does he deal with the despair of losing his ability to do, to fix, to sort things out? He’ll often end up crying into his pint, lost in a sense of helplessness.

If yourself or a family member are having difficulties with alcohol, please reach out to someone to talk about it and seek help. There are many organisations who offer services to people affected by alcohol misuse where you can share your story in confidence. We will be happy to help you at the Centre as well.